To share your memory on the wall of Vaughn Geldart, sign in using one of the following options:

There will be no more morning daily trips on the scooter to the coffee shop to enjoy conversation with the geezers; to solve all the worlds problems with nothing going according to plan.
Downtown Brampton’s ice cream and pretzel shops will see a drop in sales, but will have to worry less about the risk of broken windows from Vaughn banging on the window to let them know he’s outside waiting. To the owner of his favourite downtown breakfast place, it is okay to be late.

Much appreciation to Veterans Affairs and the Palliative Care Team for their compassion.

It was Vaughn’s request to be cremated immediately following his passing; with no funeral service.

Please join us in a celebration of Vaughn's life on Sunday February 17th, between the hours of 4:00 pm and 7:00 pm at Alderlea, 40 Elizabeth Street South, Brampton.
Read Less

Receive notifications about information and event scheduling for Vaughn

We encourage you to share your most beloved memories of Vaughn here, so that the family and other loved ones can always see it. You can upload cherished photographs, or share your favorite stories, and can even comment on those shared by others.

Posted Feb 26, 2019 at 09:18am
Dear Elaine and family:
My sincere condolences on the loss of your father and grandfather. Having just lost our Mom, we know what you are going through. May he rest in peace.
Sincerely,
Jill (Mason) Theeuwen

Posted Feb 17, 2019 at 08:02am
Vaughn was a wonderful neighbour and loved so dearly by all of us at the Belvedere. He always seemed to be smiling amd loved to crack a joke. He will be missed so much.
Comment Share
Share via:
S

Posted Feb 15, 2019 at 03:01pm
So very sorry for your loss and our thoughts and prayers are with you always.
Love John, Sherry, Cassandra & Amber
Comment Share
Share via:
KT

Posted Feb 14, 2019 at 10:01am
I am so very sorry for your loss of your father, Elaine, and Grampie to Leigh-Anne, Allison, and Jenn. I loved seeing posts of your visits. He was clearly a charismatic and very loved man.
Comment Share
Share via:
KR 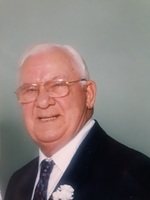