To share your memory on the wall of Edith George, sign in using one of the following options:

Edith was born, July 18th, 1923. She was the daughter of the late William (Bill) Ge... Read More
GEORGE, Edith Annie, passed away peacefully, February 12, 2019, in her 96th year at the Weston Terrace Long Term Care facility on Lawrence Avenue West.

Edith was born, July 18th, 1923. She was the daughter of the late William (Bill) George and Mary Ellen (Nellie) Bennett and sister of the late Charles Edward George, whose wife Laurie survives her. Her grandfather, the late George Bennett was a past president of Earlscourt Lodge 306, Sons of England and Justice of the Peace.

Edith was employed for many years at William E. Coutts Company, a greeting card company that eventually merged with Hall Brothers Company (U.S), to become Hallmark Canada. Edith was a talented artist and eventually taught airbrushing techniques to the employees.

She was an avid gardener and a true nature lover. She had an affinity for birds and would spend many hours documenting and drawing the various bird species that visited her garden on Lonborough Avenue, Toronto. Her garden was an oasis of flowers from early spring until late fall. Edith would spend countless hours each day, weeding and tending to it and many friends and neighbours were the recipient of its bounty. She helped her father and brother to build the home on Lonborough where she resided from 1956 until a fall in 2011 that forced her to move to Weston Terrace.

The George family were members of the Olde Davenport Rd. United Church for many years where Edith was the artist and designer of the new Honor roll of WWI men and women who served our country. Edith later became a member of the Greenborough Community Church on Keele Street, a short walk from her home.

She was a true lady yet she was most comfortable in a plaid shirt.

Edith will be greatly missed by her dear and devoted friends, Brenda Taylor and Tony Long who were with her until the end.

Special thanks to the staff of Weston Terrace and to Krisanna, Edith’s personal care worker the last few months of her life.
Read Less

Receive notifications about information and event scheduling for Edith

We encourage you to share your most beloved memories of Edith here, so that the family and other loved ones can always see it. You can upload cherished photographs, or share your favorite stories, and can even comment on those shared by others.

Posted Feb 18, 2019 at 02:28pm
Edith was a dear friend of mine for about 20 years. She was special in so many ways. I will always remember her passion for nature, gardening, birds and art; her kind, thoughtful and generous personality and her deep devotion and love for her family and friends. Edith was a talented artist and she talked fondly of her days at Coutts. She was intelligent and up to date on current events, even as she aged. Edith was a gentle soul, while at the same time she was strong and independent. She was quick with a smile that would light up a room. It was always a great pleasure to share time and thoughts with her. Edith, I will miss you greatly, but cherished memories of your kindhearted smile and your thoughtful, caring nature will be with me always. Love Nancy
Comment Share
Share via:
BT

Posted Feb 17, 2019 at 06:04pm
Edith was a very special friend and neighbour,who will always hold a special place in my heart.We shared a lot of interests such as flowers,birds and nature through the years and visited places she loved together.It would be so interesting to hear her talk about her past history of family and places she visited.She truly was an inspiration to me.She will be deeply missed by me and all her friends.
I know my life is fuller with her in it. She was a kind and wise women.It is difficult to accept dear Edith is no longer with us.
All my Love Brenda
Comment Share
Share via:
SB

Posted Feb 13, 2019 at 11:48am
My first memory of Edith was ten years ago when I moved to Strathnairn Avenue and my house faced her incredible floral garden. I would leave for work early in the morning and I would see her bent over in her garden at 6:30 am, weeding and tending to her flowers. We chatted one morning and we became instant friends. My little dog Taylor and I tried to make a point of visiting with her once a week. I will miss our time together but she has left some lasting memories for me to carry on. She was a generous and kind soul with a heart of gold and a smile that radiated with warmth and love.
Comment Share
Share via: 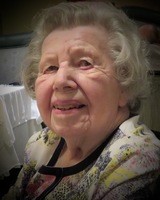 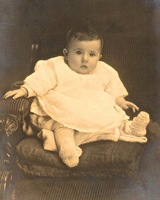 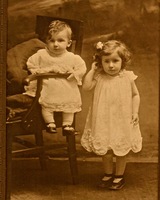 With her brother, Charles Edward George 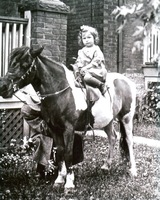