To share your memory on the wall of Edmund Fitzgerald, sign in using one of the following options:


Edmund J. Fitzgerald, our beloved patriarch, died in his sleep on April 11, 2019, after a short illness. He was in his 97th year, and married almost 72 year... Read More
Edmund John Fitzgerald


Edmund J. Fitzgerald, our beloved patriarch, died in his sleep on April 11, 2019, after a short illness. He was in his 97th year, and married almost 72 years to Florence (nee Irving), his great love and constant companion right up to the end of his life.

Edmund grew up in West Saint John, New Brunswick and fought with the North Shore Regiment in WW II, taking part in the liberation of Holland. He returned to Holland a couple of times later in life for anniversaries of the liberation and always talked about the wonderful reception and gratitude the Canadian soldiers received.

After the war, Edmund studied at UNB and went on to have a distinguished career as a Microbiologist (Quality Control) at Ayerst Laboratories (later Wyeth, Pfizer) in Montreal, where he and Florence raised their family.

Upon retirement, Edmund and Florence moved to Brampton, Ontario and had many great years with family and friends.

Despite having many physical challenges in his nineties, Edmund always had a very positive outlook and was always surrounded by love and care.

We are all heartbroken, but we know that he is at peace in heaven now, walking (without difficulty) with the angels, and perhaps sharing a Werther’s or two with them.
Read Less

Receive notifications about information and event scheduling for Edmund

Print
A private family service will be held

We encourage you to share your most beloved memories of Edmund here, so that the family and other loved ones can always see it. You can upload cherished photographs, or share your favorite stories, and can even comment on those shared by others.

Posted Apr 14, 2019 at 11:59pm
My wife Renny and I met Edmund and Flo when we moved into a condo unit in 310 Mill Street South in Brampton. My wife’s family emigrated from Holland to Canada in the early 1950s so my wife instantly felt a bond with Edmund who had played a part in the liberation of Holland through his service in the Canadian military. For myself, I quickly developed a similar bond with the Fitz’s with whom we found ourselves spending countless hours in the gazebo at 310 sharing stories and jokes. We often joked that Edmund and Flo were our adopted parents and truly, I as a child who grew up without a father, often thought if I had a father I would want him to be just like Edmund. Renny and I enjoyed visiting the Fitz’s in their new home at Greenway (Amica) and again, it always felt like we were visiting family. Edmund, we will miss you and we will always treasure the time we spent together. Rest In Peace.

Posted Apr 14, 2019 at 10:09pm
Ed and Flo were always so kind and respectful of everyone. Their sense of appreciation for each other, life and people had a significant impact on many and I am honoured to have been introduced to them. God Bless Ed and prayers for all the love he bestowed.
Comment Share
Share via:
PD

Posted Apr 14, 2019 at 08:35pm
I visited Ed and Flo in January of this year. As always the Fitzgeralds were happy to see Radha and me. Ed always had a smile on his face and was ready to amuse us with stories which brought smiles and chuckles from us. We sat in their living room like schoolchildren smiling and laughing away. The stories had a special flavour every time Ed narrated them as Ed had that special kind of effect on people.

He always called me by name...although it was not an easy name to remember...I will always be grateful for his friendship. Flo was always by his side, his loving wife, eyes, ears and memory. Because of their long and strong bond they effortlessly finished
each other’s sentences! After visiting the Fitzgeralds I always came away with a smile
on my lips and a spring in my step.

He was an inspiration to us all. Thank you for the beautiful memories, we will always cherish them. You and Flo occupy a very special place in our hearts. We love you.

May you rest in peace till we meet again.
Prabha D

Radha Nagarajah Posted Apr 14, 2019 at 09:06am
A very intelligent, non judgmental, loyal and wonderful human being who lived for his family, the love of his life - Florence, his children, grand Children and great great grand son. He sacrificed for his country- WW2 - including his sight and hearing. He walked with dignity, with his head held high. He embraced people from all walks of life and despised discrimination of any sort. He stood-up for the underdog. He and Flo embraced me as their adopted daughter and were always there through thick and thin. I will miss his wonderful sense of humour, his unconditional loyalty and love. May you rest in peace Edmund. GOD BLESS! Radha Nagarajah 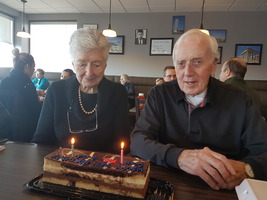 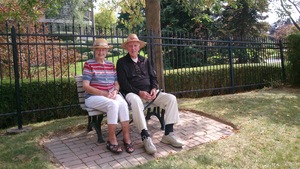