To share your memory on the wall of Oscar Wintz, sign in using one of the following options:

Oscar began his early life as a painter in Corentyne, Guyana. By the time he migrated to Canada he had become a professional in his field. He excelled in this trade and worked as a journeyman. With diligence, discipline and hard work Oscar became a Master Craftsman. Painting was his passion and love but his skills also included building, remodeling, and construction.

Oscar, fondly referred to as "Scar", met his lifelong love Doreen Bacchus in Guyana in the mid 50's where they lived until migrating to Toronto, Canada in the early 70's. Here they lived a quiet life until her passing in 2011.

Oscar was a jovial man with a great sense of humor. He enjoyed and surrounded himself with family and also loved to entertain. There was never a shortage for generosity in his space. He would give the shirt off his back for anyone who asked or needed it. His hobbies included, fishing as a young man, watching boxing and cricket, listening to country and western music, debating politics with his brothers and writing long letters. Oscar had a strong appreciation and pride for his Guyanese culture.

"Scar" has left us all with fond memories to reflect on and he will be greatly missed.
Read Less

Receive notifications about information and event scheduling for Oscar

We encourage you to share your most beloved memories of Oscar here, so that the family and other loved ones can always see it. You can upload cherished photographs, or share your favorite stories, and can even comment on those shared by others. 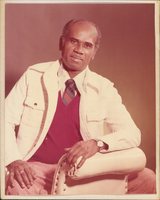