To share your memory on the wall of Pastor Jacob Kuntz, sign in using one of the following options:

Receive notifications about information and event scheduling for Pastor Jacob

We encourage you to share your most beloved memories of Pastor Jacob here, so that the family and other loved ones can always see it. You can upload cherished photographs, or share your favorite stories, and can even comment on those shared by others.

Posted Nov 27, 2019 at 01:11pm
Hello Evelyn, My condolences to you on the death of your very special father. One of my vivid memories happened i Vernon, BC. he and Gerald Ringalda were in our church service. We had rented a tv (black and white screen) to watch the moon landing. The came trooping in and made one fast dash to watch the very first moon landing - no hello, no 'how are you' until after the landing. Were we upset about this? No way. It was a delight to have them with us; My late husband and I would visit your family on a remote place= accessible only by boat, when they and he Ringaldas came to the Okanagan for their holidays. We, John and I. would stay in your home whenever we were in Westminster. Many happy and hospitable memories. God's blessings on you.

Posted Nov 10, 2019 at 08:26pm
My condolences to you both Evelyn and Syd and family with the passing of you father and grandfather. I know your parents connection with my Opa and Oma Martens stems back to Holland as my Opa was also from Assen and my Oma from Westerbork. When my Oma turned 102 in September 2017, she had the honour of having a picture taken yet together with your father. She passed away very suddenly just a couple weeks after that. It's the good memories that we have to hold onto after we lose our loved ones as time goes on. Thinking of you as you carry on in the days ahead when you mourn and will miss you dad!
Comment Share
Share via:
SC

Posted Nov 09, 2019 at 01:02pm
I met your father Jacob and mother Maria at the swimming pool across from Holland Christian Homes in Brampton. They were such a delight and a wonderful Christian couple. We shared our faith and I enjoyed chatting with them. Sadly, I lost touch with them over the years and often wondered about them. I know that I will see them both once again in Heaven.
So sorry for your loss.
Sandra Culley, Brampton.
Comment Share
Share via:
GV

Posted Nov 08, 2019 at 06:55pm
Irma and I would like to extend our condolences with the loss of your father, father in law, grandfather and great grandfather.
We have wonderful memories of him serving our church in St.Catharines. In 1978 pastor Kuntz and pastor DeBolster did a series of sermons on the book of Revelation. We have printed copies of all those sermons, and right now I am working my way through them again. We pray for the peace and comfort that only our faithful God can provide
Comment Share
Share via:
JT

Posted Nov 08, 2019 at 10:36am
Jackie Taylor, Orillia
Dear Family: My sincere condolences in the loss of your wonderful father and Opa. What wonderful memories he has left for all of you. One of my favourite memories is when I stayed with you folks in the parsonage on Emily St. in Orillia. My Mom was in hospital for a period of time and your Mom and Dad took me in and looked after me for a week or so. I can still remember it being your Dad's birthday and him bounding, yes bounding down the stairs early in the morning singing 'Happy Birthday to Me, Happy Birthday to Me, etc. with the biggest twinkle in his eye and your Mom just smiling lovingly and shaking her head and saying Jaap, you are not supposed to sing that to yourself! In the many years that followed, he would be one of few people who would call me 'Koosje' and get away with it. I had changed my name to Jackie at age 14, but he always insisted I would be Koosje in his books. I loved the man and always looked forward to seeing him when he was in the Orillia area. I thank God with you for the true and faithful servant he was and for the heart that had enough love to encompass anyone and everyone, irregardless of their position in life, or the baggage they carried, always ready to share of God's abounding love for them. May your memories continue to bring you comfort. (By the way, I was known as Koosje van der Boon, daughter of Jan and Aafke van der Boon)
Comment Share
Share via: 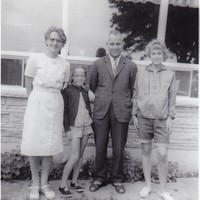 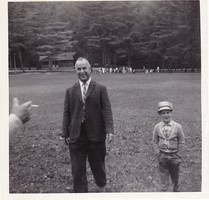